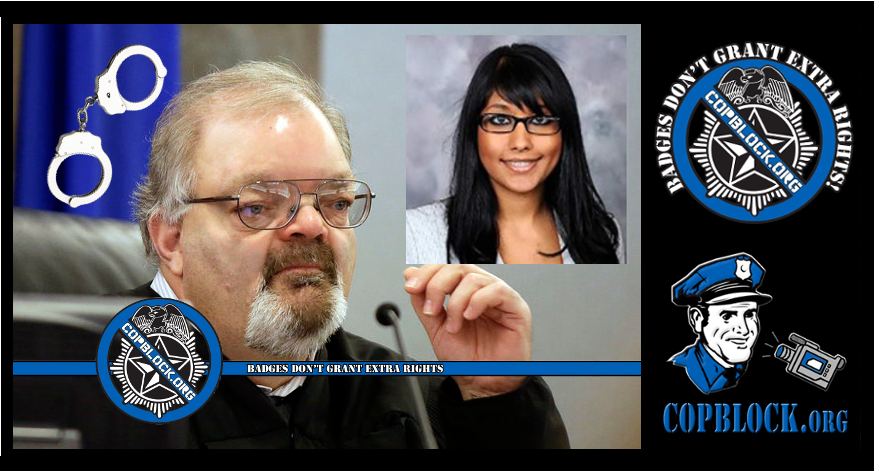 On Monday, Las Vegas Justice of the Peace Conrad Hafen ordered Deputy Public Defender Zohra Bakhtary to be handcuffed and placed within the area where defendants that are in custody normally are seated in the Las Vegas Justice Court. According to the judge she had violated “courtroom decorum” by speaking after he had told her to “be quiet.” (Transcript included below.)

Later he explained to the Las Vegas Review Journal in a phone interview:

“There’s been a progression of steps in the courtroom where I’ve tried to let her know it’s not proper decorum for her to continue to talk over me or interrupt me after she’s already made her argument,” he said. “Once an argument is made, then you have to allow the judge to respond, so there’s a clear record, and you shouldn’t be interrupting the judge as the judge is making a ruling. … I’ve been trying to work with her. And today it just spilled over to where I thought, ‘Well, clearly she’s not understanding what I’m trying to tell her.’ ”

However, according to Bakhtary, she was simply trying to properly defend her client and the judge wouldn’t listen to her argument. (Once again, via the Las Vegas Review Journal.)

“It all happened so fast,” she told the Las Vegas Review-Journal on Tuesday, a day after Las Vegas Justice of the Peace Conrad Hafen ordered her placed into custody. She was left to sit silently, alongside inmates, while her client was sent to jail for six months.

Moments earlier, Hafen told Zohra Bakhtary to “be quiet,” as she tried to argue that a man facing larceny charges should not be thrown behind bars. After Bakhtary tried to speak, the judge asked her if she wanted to be found in contempt.

“I was not trying to argue with the court,” Bakhtary said. “I was just trying to calm the situation down. I was never allowed to speak. I was never given the opportunity to respond to his question. Had I been given the chance to actually respond, it would have been, ‘Absolutely not…’”

“Every day I zealously represent my clients,” Bakhtary wrote in a statement to the newspaper. “Every individual who goes through our criminal justice system has a constitutional right to effective assistance of counsel. It is a frightening day when a lawyer is locked up for fighting on behalf of her clients and their rights. That is precisely what I was doing, my job. I was placed in handcuffs for attempting to speak on behalf of my client … I have a great deal of respect for our judiciary. I did not act unprofessionally. I simply wanted the Court to listen to my argument and consider it before remanding my client for a 180 day jail sentence. The Court’s constitutional duty is to listen to arguments, not silence them.”

And contrary to Judge Hafen’s comments about her having a habitual issue with following decorum, her supervisors within the public defender’s officer maintain that they have not received any sort of complaints about her work or demeanor either on or off the record about her conduct. They even characterize conversations they’ve had with Hafen himself regarding Bakhtary as complimentary in nature.

As far as her competency as a lawyer, Clark County lead public defender Phil Kohn says, “She’s a professional lawyer. It’s what I want in public defenders, and it’s certainly what our clients deserve.”

Bakhtory has also been defended by several legal experts, who according to the Huffington Post stated that it was the judge that was in need of a lesson in decorum. Some even pointed to it as a larger workplace issue of female public defenders being disrespected by judges:

It’s well within a judge’s power to restrain a person who is acting out of order in the courtroom, but rarely do they use this power against an attorney advocating on behalf of a client. And while Hafen didn’t make any specific references to Bakhtary’s gender in the court transcript, it’s possible to see the incident as fitting into a larger pattern of men silencing women in this kind of setting.

Stephen Cooper, a former federal and D.C. public defender, wrote an article on Bakhtary’s handcuffing that highlights two other instances in recent years in which female public defenders were treated with similar disrespect. He cites a particularly disturbing case from 2007, reported by The Washington Post, where a D.C. Superior Court judge ordered an attorney — a woman of color, like Bakhtary — to be “searched, shackled and detained” simply for attempting to inform the judge that her client was “homeless and poor.” That judge was later found to be grossly out of line and was reprimanded for his behavior.

Also on Thursday, the Clark County Defenders Union issued a statement criticizing Hafen’s actions in a letter signed by the members of the union, which represents 105 defense lawyers within the Las Vegas area.

The letter states (via the LVRJ):

“Judge Hafen improperly handcuffed one of our public defenders simply for doing her job,” according to the letter, signed by a 12-member board of directors. “His actions were unreasonable and unprecedented. Judge Hafen was wrong.”

The defense group wrote that with Bakhtary in handcuffs, Fernandez was denied his right to an attorney.
Hafen “violated one of our most sacred, fundamental, and constitutionally protected rights,” according to the letter.

They also questioned why the audio recording system was turned off in the courtroom (the video is included in the previous link) and say that the transcript appears to be incomplete, not including the “aftermath” of the incident when Bakhart was released and reportedly asked for, but was denied, a break. (The full letter is embedded below.)

Clark County, Nevada Bailiff Has Woman Arrested For Accusing Him of Groping Her in Family Court

Full Transcript of the Incident: