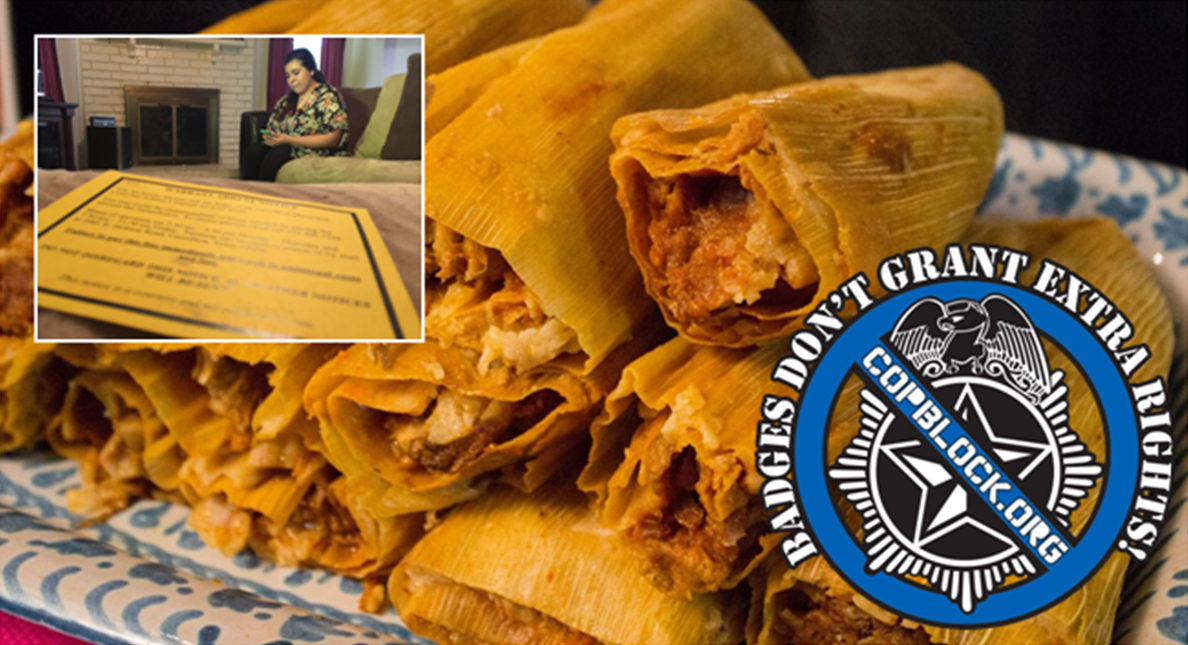 In yet another example of the nanny state gone wild, a Texas woman was fined and threatened with arrest for daring to have the audacity to sell tamales in her neighborhood.

Dennise Cruz, of Carrollton, said she was dumbfounded to recently receive a warrant arrest notice in the mail from the city saying that she needed to get in touch with the court house or risk being thrown in jail.

Several months ago, Cruz decided to post on Nextdoor that she had tamales for sale. Nextdoor is a decentralized community-based social-networking site that acts like a mini-Facebook for individual neighborhoods.

It is estimated that over 60 percent of American neighborhoods are now on the network, and users access it in order to do things like share classified ads, notices about nearby events, and post alerts about crime and emergencies.

Like any other social network, police routinely comb through Nextdoor to do what some departments have called “micro-community policing.” This includes recovering stolen items and looking out for individuals defying regulations.

According to Cruz, when she contacted the city, she was informed by a clerk that someone had snitched on her for not having a food permit. The report most likely came from an overzealous neighbor or a cop patrolling Nextdoor.

“Never would have I thought, tamales. To know that somebody can be arrested over that, that to me is unbelievable,” Cruz said. “It’s just so common. That’s why to me, I don’t understand why it’s such a big deal.”

Cruz is now in the hole for $700 having been fined by the city for $617 plus court costs. She said she was perturbed that who ever made the report didn’t come to her first, and maintained that she plans on fighting the fine in court, calling it “a lot of money.”

The director of Carrollton Environmental Services said that Cruz was issued a fine instead of a warning because the corn and meat used to cook tamales makes them a “potentially hazardous food.”

Regulatory agencies for local governments in Texas have a sordid history of shutting down seemingly inconsequential ventures of individuals trying to make a couple of bucks by providing their communities with a good or service.

Regulators maintained that an inspection from the Health Department, as well as a $150 permit, was required to sell lemonade because it needed to be refrigerated in order to prevent bacteria growth. There have also been numerous stories of individuals being arrested for “illegally” selling tamales throughout the country in recent years.

“What if somebody got sick from them? What if somebody could have died from them?” Cruz asked, referencing the tamales. “I completely understand those concerns [but] I’ve seen so many people doing it. And unfortunately it’s me who’s having to deal with it.”